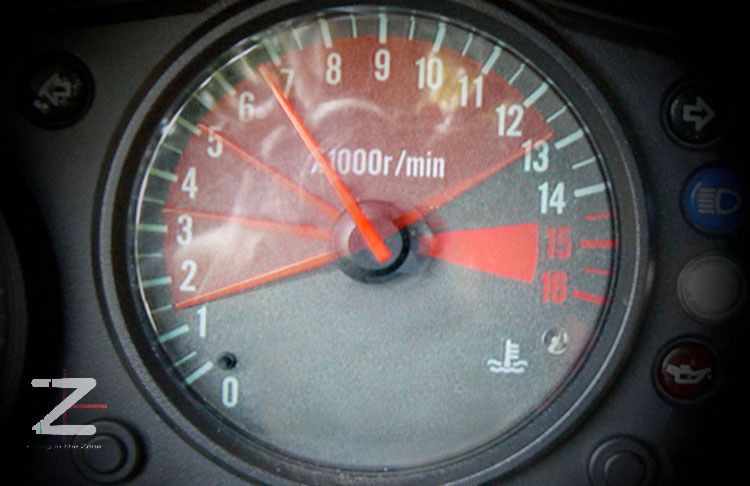 What is Throttle Blipping?

To execute smooth downshifts, it is important to match the engine speed with the road speed. You can do this by slowly easing out the clutch (after you slow).

But sometimes a rapid downshift is necessary. The problem is that releasing the clutch at the wrong time and too abruptly can lead to lurching re-engagement and a rear tire skid or “chirp”. This is where throttle blipping comes in.

Throttle Blipping is the term used to describe the rev-matching technique where the rider momentarily “blips” the throttle to increase engine rpm to better match the revs to the road speed when downshifting.

You’ve probably heard riders blip their throttle as they downshift while rolling to a stoplight. But, throttle blipping is best heard when a sport bike is decelerating and downshifting (and usually braking) from high RPM and high speed.

Listen to my friend Aaron as he demonstrates some of the quickest and smoothest throttle blipping I’ve heard (or is it the magic of modern sport bike electronics?). Listen at the end of the straight starting at 0:15:

Here’s another video showing my throttle hand as I blip the throttle. See 2:20. For comparison, I enter the same corner, but without blipping at 4:08.

Here’s another video showing me smoothly execute three non-blipping downshifts at around 4:15:

How to Blip a Throttle

The throttle blipping technique is done by quickly cracking the throttle open then closed (blip) while you simultaneously squeeze the clutch and click the gearshift lever. The point is to get engine RPM matched to the lower gear ratio before you release the clutch. The rapid blipping technique occurs within the span of about one-half second. The clutch is quickly squeezed and released as the transmission is shifted down and the right hand blips the throttle. This is repeated with every downshift, one gear at a time.

Oftentimes, you need to brake while downshifting, but trying to simultaneously brake while blipping is a difficult skill to master. The problem is that moving the right hand to blip also causes the braking fingers to move, which invariably changes brake pressure. Combining braking and throttle blipping can be done with less difficulty if you apply the front brake with your index and middle fingers while you close and open the throttle with your thumb and two outside fingers. Arching your brake fingers is also helpful in isolating throttle movements.

The point is to blip the throttle while keeping consistent brake lever pressure. This is most easily done when using very firm braking pressure , like when braking hard from high speeds where brake lever movements translate into relatively minor brake force changes.

Nowadays, you can get a motorcycle that will allow you to shift up and down without using the clutch. When downshifting, the bike’s electronics automatically blips the throttle perfectly as you downshift. Pretty slick.

Some motorcycles benefit from throttle blipping more than others. A big V-twin or single cylinder engine with a lot of engine braking can more easily lock the rear tire if the clutch isn’t released carefully, so blipping makes sense. But, for many bikes, especially ones with in-line 4 cylinder engines, it’s easy enough to quickly but gradually release the clutch  between downshifts. It’s what I do when I ride my Triumph Street Triple on the street or track (see video below). With the introduction of slipper clutches on many sportbikes these days, it’s even less necessary to blip the throttle.

Still, a lot of riders swear by throttle blipping. That’s fine, if you do it skillfully. I find that it just adds another thing to do while I’m screaming into turn 1 at over 100mph. Listen to my downshifts at the end of the long straightaway in this video from a recent track day, starting at 2:06 and then throughout the video. You can hear how I simply downshift and then ease out the clutch. It’s done quickly, but smoothly:

One problem with throttle blipping is that it minimizes the stabilizing effect that comes from engine braking. Let me explain.

Engine braking (or rear brake force) causes the rear tire contact patch to drag behind the front tire’s contact patch. Think bungie cord. This pulls the rear of the bike in line with the front.

Blipping the throttle during downshifts minimizes engine braking compared to simply easing out the clutch. A little bit of engine braking still happens, it’s just not as much.

Throttle blipping can be a challenge to learn. But, here’s how.

Sit on your stationary bike with the engine idling and in neutral. Blip the throttle quickly (like a spasm) so the engine revs 600 to 1,000 RPM.

The next part can’t be done while the bike is running, so shut it off and repeat what you just practiced, but this time press the shift lever down simultaneously with the throttle and clutch. All three controls are engaged at the same time, within the span of less than a half second.

Now go try it in a parking lot. I won’t be pretty at first, but stick with it. Good luck.

Do you blip your throttle? If so, or if not, tell us why?