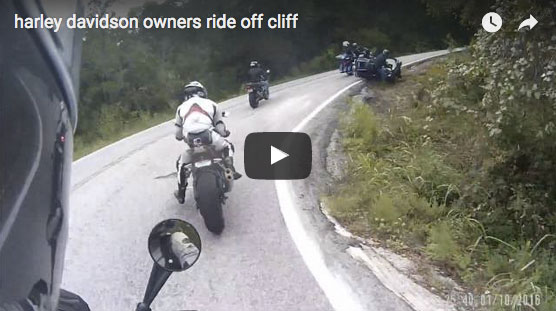 Here is another installment of “Videos Lessons” where we pull from the seemingly never ending supply of rider videos from which we can learn. Even though these are 2 very slow speed crashes, the injuries could have been serious. I hope everyone is okay.

This particular video shows the seriousness of slow speed mishaps and of course the importance of rider training.

First, take a look at the video. The crash happens around 1:15. I’ll wait.

Pretty scary, right? It’s hard to see, but it seems the first rider to crash was actually in the lead, and the rider with the passenger had to slow and go around his friend as he tipped over. The second rider (with passenger) watched his friend fall and appeared to be putting his right foot down to stop, but failed to use his front brake and rolled off the road.

I want to point out that at about :45 the Harley riders demonstrate some apprehension about their ability to handle the tight turns. You can see this as they approach the right hand turn marked by a 20mph road sign. They are smart to slow down because there is a yield sign before a narrow bridge, but they seem to slow more than necessary. This is often indicative of serious cornering anxiety. The confirmation of weak cornering confidence comes when the mishap occurs.

It’s interesting to note that this mishap is different than others where the rider enters a turn too fast (for his/her ability) and runs wide (see this video). In this case, both riders fell on the inside of the right-hander. Why?

Let’s begin by discussing the rider who first crashed. He says that he hit a hole in the road and then rode over the patch of sand. I don’t doubt this. I also don’t doubt that the hole and the sand contributed to upsetting the bike’s stability (at least a little bit).

Even so, the real questions needed to be asked are:

1. why did he hit the hole when there was opportunity to ride over smoother pavement?

Here is my explanation:

1.Why did he hit the hole? The reason the rider who first crashed hit the pothole was because of poor visual skills. It’s human nature to look down when we are anxious. It is likely that the rider wasn’t looking far enough ahead to come up with a plan to manage the tricky hairpin, resulting in him being taken by surprise by the tight radius and and steep slope. As he rounds the bend, he sees the hole and the sand which further increases his anxiety and triggers his survival response that includes staring at the hole. When we panic, we tend to target fixate on hazards. The problem with staring at a hazard is that we tend to steer toward it like a super-powerful magnet.  This tendency of going where we look is called Visual Direction Control and is likely what causes him to run over the hole…and then the sand.

Solution: Looking well ahead allows you to avoid surprises. Also, looking at an escape route rather than the hazard could have kept the bike away front the surface hazards. Seeing hazards early is critical for keeping these dangerous survival triggers from taking over.

2.Why did he fall over? Hitting the hole and sand did not make the crash inevitable. Factors that caused the actual fall probably included an overreaction and extreme tension. This would result in the rider clamping on the handlebars and chopping the throttle at a time when he was already moving very slow on a steep uphill hairpin. This reaction hindered direction control and killed what little amount of stability the bike had, causing gravity to take over and the bike to fall over.

Solution: Motorcycles are more stable with speed. Had he kept steady drive the bike’s suspension would have handled the bump better and stability would have been maintained. As far as the sand goes, easy acceleration and a light grip on the handlebars while reducing lean angle slightly would have allowed the tires to deal with the sand while allowing the bike to remain in its lane. As I mentioned earlier, had the rider kept his eyes up, he would have likely selected a path that avoided both the hole and the sand. Problem solved.

The lead rider’s crash was caused by the same two reasons I already outlined: Looking in the wrong place and insufficient speed for stability.

1.Why did he ride off the road? Because we tend go where we look. The lead rider looked over his right shoulder, causing the bike to drift to the right and drop off the shoulder and down the ravine.

Solution: Same as above. Look where you want to go. Yes, seeing your buddy fall over can grab all of your attention, but it’s imperative that you always remain in control and that means keeping your eyes ahead until you can come to a safe stop.

2. Why did the bike go off the road so quickly? Because of a loss of directional stability. When the rider decelerated on the steep slope he slowed down enough for gravity to take hold of the bike and send it down the hill.

Solution: Same as above. Had the rider maintained positive drive he would have completed the corner on two wheels.

This video demonstrates the importance of two of the most critical skills motorcyclists need to maintain control: Visual direction control and Speed for stability. Think of these two hapless riders the next time someone suggests taking a parking lot course that covers basic slow speed maneuvers and cornering techniques. The techniques would have saved these two a world of hurt and embarrassment.

Even better is if they had signed up for on-street training where instructors can observe problems at real world speeds and conditions.

Here are two links to articles I’ve written about visual skills and cornering. And here is an article specifically about managing hairpin turns. Use the Search field above to find more pertenent articles. These topics are also covered in depth in both Riding in the Zone and Motorcycling the Right Way.