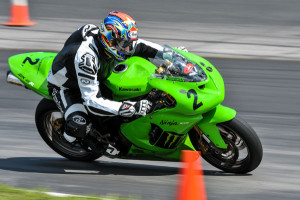 Jeff, being “That Rider”. photo: otmpix.com

It was a long and cold winter here in the Northeast, but at the first Tony’s Track Days event of the year at the beginning of May, we were given clear skies and ideal temperatures. Last year, I worked hard on my track day form which included letting speed come with practice. My effort was rewarded with an advancement from the novice to intermediate level. This year, I was amazed at how much I retained even with a seven month gap.

My Mantra: “You Are That Rider Now!”

As I rolled out onto the track for my first session and each one thereafter, I heard my track Guru Ken’s voice in my head, and what he told me at my one-one-one session last year: “You are that rider now! – when you go out for a session, ride that way right from the start.” I started saying that to myself – “You are that rider now.” I believe it was that confident mind-set that allowed me to tap into the foundation that I had built from my work last year.

Last year, I met my goal of completing ten track days. This helped me, through repetition, build muscle and mind memory. The first few sessions of my first day this year went remarkably well. Of course, I was not as proficient as I was at the end of last season, but my body “knew” what it was supposed to do, and I was able to get into the proper body position quickly.  My eyes reached out and ratcheted far ahead through the turns and down the straights to reduce the sensation of speed.  And, as the day progressed, I was able to work up to speeds approaching my fastest last year. 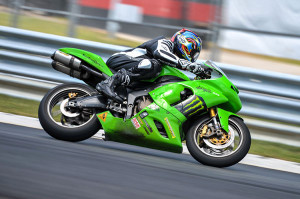 The thing that really amazed me was how comfortable I was in my head. I no longer felt a flash of fear when another rider slowed dramatically, crossed my line in front of me, or passed me on the outside of a turn; I just managed the situation without much thought.

At one point, I was following behind a rider on a faster bike, and I was on his tail in the turns, but he would pull away in the straights. I decided that I could pass him going into the sharp right hand turn after the long straight by waiting to initiate my braking until after he did and trail brake into the turn as best as I could. I did this, and was just about to “tip-in” to the turn, when another rider came up on my right. I delayed my turn waiting for this rider to initiate his. He never did. Instead, he stayed upright, and locked his rear wheel, and went straight into the run-off area. Once he was out of my line, I went about my turn and kept riding. Last year, this incident would have scared me silly and shaken me the rest of the day. This year, my heart rate didn’t even go up…but maybe it should have!

So, I guess I really am “that rider now.” The lesson for me is that a mantra, conscious effort, repetition, and a great coach build confidence. Thanks Ken!

Jeff Meyers is a self-described middle-aged sport bike and track day dog. He has been riding for almost 30 years and, like many folks of his vintage, was taught by his friends. He is amazed to still be here given what he did at a young age on a motorcycle with such little skill and such a need for speed. He is a lawyer at his “real” job, but also is a part time Motorcycle Safety Foundation Rider Coach and has had the privilege of working for Suzuki assisting in running demo rides, mostly at the Americade rally in Lake George, New York. Jeff loves to learn, especially about riding motorcycles.