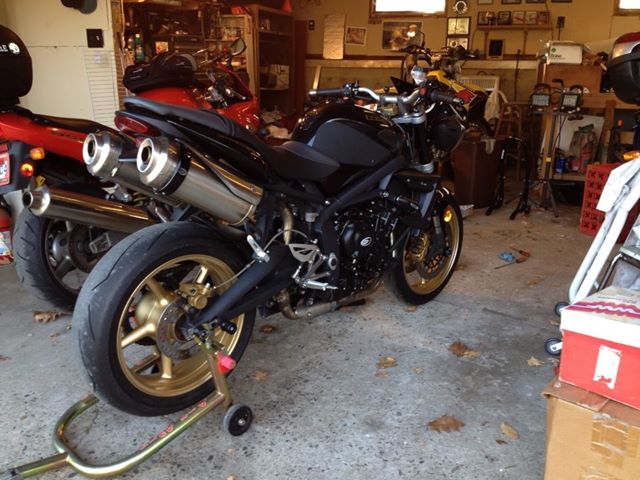 Tony from Tony’s Track Days and I are leaving for the southern state of Alabama to take in the beauty (and warmth?) of the Barber Motorsports Park and absorb decades of motorcycle history at the Barber Museum. We’ll be riding our motorcycles with X-Act on Saturday and Sunday. Reports to follow. In the meantime, enjoy this video with Ben Spies and Colin Edwards. I’m afraid our trip…I mean Mancation… may be scarily similar to theirs:

Tony and I are riding with X-Act Motorsports and they, like many track day organizations, require glycol anti-freeze/coolant to be removed and replaced with distilled water or one of their approved substances. Those of you who ride with TTD know that we don’t require customers to drain their coolant. This is because in the many years that we’ve been running track days, we rarely ever have much trouble with coolant spills. Yes, occasionally some dribbles out of the radiator overflow from a gravity-challenged bike, but it’s never been a big problem. But, it sure can be a hindrance for regular street motorcycle riders to remove their coolant.

And now I’m reminded of just what a pain it is to do. I’m mechanically inclined, so this chore is well within my abiities. But, still… it’s messy and time-consuming when I could be doing something much more productive like polishing my wheels.

Transforming the Street Triple from street duty to track bull dog is not a big deal. (I decided that it looks like a bull dog) Although, I discovered that Triumph makes silly decisions that make it unnecessarily difficult to take street stuff off. One poor decision was to put the front turn signal connectors underneath the fuel tank! WTF? To raise the tank, I have to remove the Scott’s damper, so I’ll be putting connectors where Triumph should have put them in the first place: between the tank and the signal housing so the directionals can be removed in seconds, not tens of minutes.

X-Act also wants us to zip tie our sidestand up, which TPM requires, too. Again, we at TTD never found this to be an issue, but it’s a small thing to do. I’ll just make the zip-tie loose enough to slip off so I can use the stand in the paddock. No, we aren’t bringing paddock stands…light is right on this trip.

So, the bike is ready. Next on my list is packing my riding gear. I have one of those really cool Ogio gear bags on wheels, but Tony tells me he has matching plastic bins that fit perfectly in the back of his truck, so I may have to leave the sexy Ogio at home.

I keep all my track stuff in one place, so gathering it up was easy. I kept my tattered Vanson leathers aside until I found out whether my TTD Heroic leathers would be arriving in time for the trip. I heard from Todd today and he says that the leathers must have been shipped by camel, so they won’t be at my house before I leave. He says they will be at the hotel in Birmingham when we arrive. We shall see.

If they do arrive, then Tony and I will either look like we intended our matching black and yellow TTD leathers to look…like team colors. But there is a slight risk that we could be mistaken for advocates of same sex marriage (I don’t know Tony’s politics on this matter, but I’m pro, BTW). We’ll see how the southern boys react. Not that there is anything wrong with that.

Wait, I thought Alabama was supposed to be warm, or at least warm-ish. But, the extended forecast says 45 degrees on Sunday. Is this some cruel joke? Well, I’m not laughing.

Now, we hearty New Englanders can handle the cold temps, it’s just that we prefer temperatures that don’t conspire to make our tires Flintstone-hard. What I can count on is the warmth of good friends hanging around the tire warmers and fighting over Wendy Butler’s cookies.

I meet Tony at his house on Wednesday, Nov. 20th at 9:00 AM. We’ll load the bikes and hit the road. Anyone know where there is a key fob store near Rt 84?

We made it to Virginia and will do the rest of the trip tomorrow. All is well so far. Tony hasn’t farted once, at least he denied doing it, but I don’t buy his claim that Renee spilled baked beans in the truck last week. I didn’t argue.

So, a trip to Walmart scored us a tarp, extension cord and tarp tie downs. So, now the bikes are tucked in for the night with the ceramic heater I brought turned on high to guarantee that our radiator water won’t freeze.

Well, 19 hours of driving later, we pulled into the hotel located just down the road from the racetrack. we’ll be meeting with the other Northerners for dinner and then we’ll hit the museum tomorrow. Look for lots of photos of the museum in the next couple days.

I’ll let the gallery speak for itself.

First Day on the Barber Track

We expected cold and possibly rainy conditions, but the weather Gods looked favorably on us and gave us dry and not too cold temps (for us New Englanders). We were in the 40s in the morning, with 50s in the afternoon. Getting heat and keeping it in the tires was a challenge, but the grip was fine for the pace we were running as we learned the track.

So, what is the track like and was it worth driving 20 hours to get to experience its awesomeness. In one word, yes. It’s a combination of fast, flowing corners with some tight stuff thrown in. The biggest challenge was to figure out where the heck I was on the track. There are a lot of blind corners, many hidden by hilltops. I would be approaching a hill, not remembering what was on the other side. Once I crested the hill, I would say “oh yeah” and then get on the gas.

By the last morning session, I was starting to not be so lost and was picking up the pace. The afternoon sessions went very well, except for the riders who didn’t understand the concept of taking a couple of laps to get some heat int he tires before wicking it up. That session was a wash with two red flags almost as soon as the session started and again at the restart. Oh well.

Up and Down, Left and Right

The Barber track is a medium-fast, flowing roller coaster of a track. It was a challenge to learn, but once I figured out where I was on the track, things went well. One problem was the cold temperatures. Saturday was in the low 50s and wasn’t bad, but it was 30 degrees when we arrived on Sunday.

We decided to give the track and the air a chance to get a bit warmer before we rolled. After lunch, we went out and proceeded to lay down some respectable laps. I did not have tire warmers, which would have made the first few laps less stressful, but the tires did eventually warm enough for fast, knee-down cornering.

Here are some photos from the weekend. Thanks to Raul Jerez / Highside Photo.

Since this will be our first time at Barber, we will be putting our “Learning New Tracks” skills to use.  I did write an article on learning new tracks last year for the TTD website, but do any of you have tips for us that you find helpful?