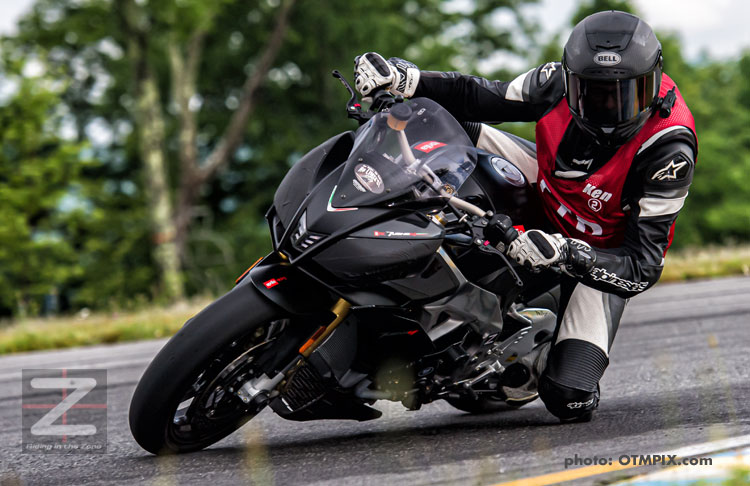 After a full season owning a 2011 Suzuki GSXR750 track day bike, I decided to take a different route and grabbed a 2013 Aprilia Tuono V4 APRC.

Check out the article I wrote about some things I discovered about the Tuono.

The bike was setup as a street bike, but with a lot of little goodies already installed by the previous owner. Many are items I don’t typically spend money on, like an aftermarket exhaust and sexy cosmetic changes. But, they are cool!

Below, I describe the modifications I did to make the bike more track worthy and also list the stuff the previous owner installed.

The first thing I do with any bike I plan on taking to the track is to bolt on engine and frame protection. Twisted Throttle is a sponsor of this website and sell R&G and SW-Motech accessories that work really well and are reasonably priced. Click here or on the Twisted Throttle logos on this page to buy accessories and help support the site.

There is a debate about whether frame sliders are a good thing or is they actually cause more damage. Sliders are great for minor drops, but can also catch a curbing or edge of the track and cause the bike to flip. This happened to a ZX636 I once owned. I decided to take the chance and install some R&G Aero Frame Sliders.

These sliders are high quality, with a robust two-location mounting block. The pucks are the usual Delron nylon units. To reduce the chances that the slider will catch when sliding, I cut the pucks down by about 1-1/4 inches. So far, I haven’t put them to the test.

Protecting expensive engine cases is of primary importance. I have used Woodcraft products, but like the full coverage of the R&G covers. These British Superbike approved race-spec covers are made of tough plastic and include replaceable sliders. I bought the complete kit which includes both left and right covers. Buy the case covers here.

Installation is easy. All you have to do is remove a few of the case bolts, locate the cases and replace with the supplied bolts and spacers. One small issue was that the opening around the oil fill cap wasn’t quite big enough, so I trimmed it with a file.

The Arrow exhaust is a work of art. And it sounds awesome, especially without the db insert. However, one of the racetracks we frequent has a decibel limit and I am not willing to take the risk of getting dinged.

Besides, the exhaust still sounds great even with the insert…like a hot rod.

The R&G exhaust protector is a nice piece that straps onto the exhaust can using a hose clamp. There is a rubber protector strip to keep the clamp from marring the exhaust.
Buy one for the stock exhaust here.

R&G also makes axle sliders to help keep the forks and brakes away from the ground. The only thing is that you have to take them off to get the axle out to remove the wheel to change the tire. Not bad, but it adds time. Buy axle sliders HERE.

You can also note in the photo below the zip tie around the fork tube. This slides down to indicate how much fork travel is being used. Also note the torque spec is written in Sharpie for easy reference.

Regarding the brakes, they could use improvement with some higher performance brake pads. They are very good, but I’m used to more sensitive brakes; these are just a bit less powerful and slightly numb.

One accessory I think is worthwhile are aftermarket levers. Not only do they hold up better in a crash, but they give better feel and they look trick. I’ve had cheap Chinese knockoff that work okay, but these adjustable ASV levers are much nicer. They are pricey though.

The Aprilias are known for leaking fuel around the gas cap when full, especially when braking hard. I would find a fuel stain along the top of the tank, that is disconcerting to say the least. I can imagine fuel dumping in a crash and setting the bike on fire.

The problem is that the gas cap gasket doesn’t sit tight against the fill opening. The fix is to place an O-ring between the gasket and the fuel cap. Measure the gasket and buy a few different size o-rings to see which one fits and allows the gap to lock. I got mine at a hardware store.

Removing the turn signals is easy enough. All you need to do is unscrew the lens from the housing, unplug the two wires and pull the wires out from the stalk. Then tuck the wires securely under the side fairing.

This is a popular mod among Tuonoistas. The stock Tuono tail looks just fine and as a bonus, has a passenger seat. Because the RSV4 tail has no accommodations for a pillion, the passenger pegs were removed and the exhaust hanger connects to the right peg mount.

You can see in the photo that I put some electrical tape on the pointy parts to prevent the tail from getting scratched as I swing my leg over the bike when mounting.

The bike came with a taller MRA windscreen, which certainly makes riding long miles more comfortable, but it also helps with neck fatigue when ripping down a straightaway at 140mph. And the smoke version looks great.

My track day organization, Tony’s Track Days, has a regular Pirelli dealer which makes using that brand a no brainer. Even so, I totally love the feel of the Pirellis, whether the Supercorsa or the race slick. Since I had some 180/60/17 SC1 rear slicks hanging around, I mounted them up and they are working great. I’ll be putting on the spec 200 tires when I’ve used up the 180s.

Regarding wear, I am getting an impressive 6-7 days at a combination of intermediate (when instructing) and expert pace. That’s not what I expected when I first got the bike. I get even more from the fronts, of course.

That’s it for now. I’ll update this post as I make more modifications.

Support Riding in the Zone: Buy from Twisted Throttle