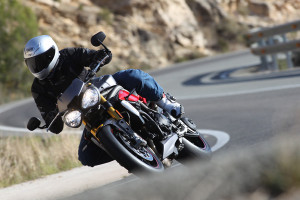 I recently returned from Spain after testing the 2016 Triumph Speed Triple R. Take a look at the short video to hear some of my thoughts.

But, first, some history:

Way back in 1994, Triumph introduced the Speed Triple. This bike was the first real mashup of sportbike performance with the naked styling and practicality of a universal “standard” motorcycle. This new Streetfighter genre helped redefine the Hinckley based company as a serious player.

Over the years, the Speed T went through an evolution that saw increases in motor displacement, as well as upgraded suspension and brakes. In 2011 Triumph jettisoned the classic round “bug-eye” dual headlight arrangement for the current love ‘em or hate ‘em oblong-shaped beams. That year, ABS was first offered as an option.

In 2012 Triumph introduced the uprated “R” model that included Öhlins suspension, Brembo brakes, lightweight forged aluminum hoops and bits of carbon fiber trim. To this day the Speed Triple has remained one of the most well-rounded and exciting bikes on the market, earning Motorcyclist’s “Best Naked Bike” award in 2011 and 2012. A lot has happened in the naked bike segment since then and Triumph knew the Speed Triple was in need of some serious love if it is to rise to the top once again.

To get a feel for the new Speed Triple, we rode in the coastal hills an hour south of Barcelona and ended the day riding on the tight and technical Carafat Circuit.

So, how was the bike?

Read my review at MotorcyclistOnline.com