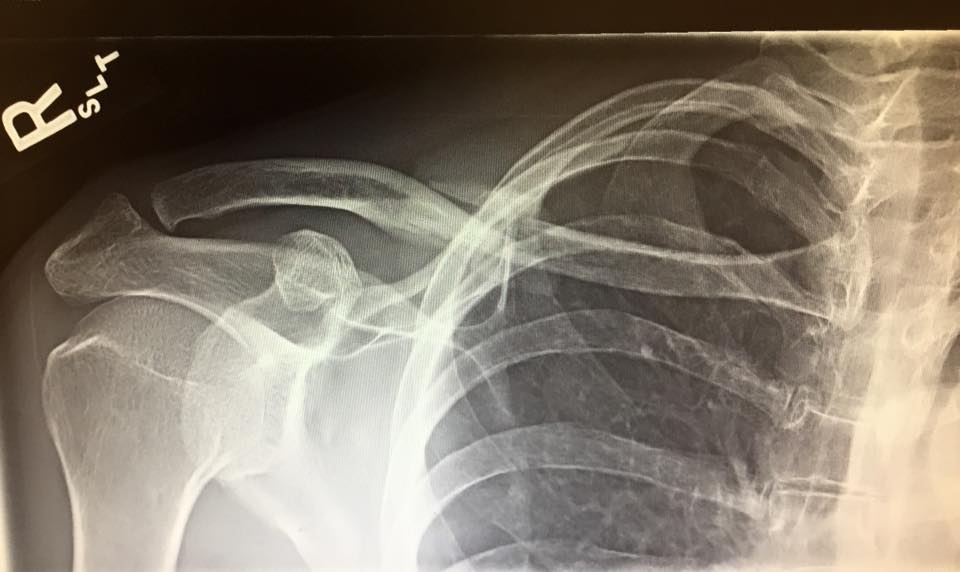 I crashed. In the scheme of things, the mishap wasn’t a huge affair. I was only traveling about 15 mph when I tucked the front tire of a brand new Ducati Multistrada, but the vertical force was enough to pop my collarbone.

Dirt bike riding and road racing aside, it’s been quite a while since I last found myself on the ground next to or underneath a motorcycle.

My last road mishap was in 1978 when I fell victim to a dreaded left-hand turner at an intersection. I took a ride in the blinky bus (aka ambulance) but was promptly treated and released. My 1973 Yamaha TX650 didn’t fare as well and was sold for parts.

This most recent crash involved a street bike, but didn’t happen on the street, rather it occurred during a joint Bosch/Ducati press event in Detroit Michigan on the gravel test track at the Bosch proving grounds. You see, I was invited to test the most-awesome safety electronics found on the newest Ducati Multistrada. FYI, the cornering ABS is truly amazing.

Racing Crashes Don’t Count, Do They?

Racetrack crashes have also been relatively rare but do occur a bit more frequently, which is the result of pushing the limits or vying for a podium finish.

My previous track crash happened about 3 years ago when I pushed the front tire of the Twisted Throttle BMW S1000RR a bit too hard (I sense a theme) into a cold and slightly damp turn 11 at Loudon trying to get a good knee down photo. No injury, but a truckload of embarrassment.

A few years earlier I fell in turn 5 at New Jersey’s Thunderbolt Raceway when an old and cold front tire finally gave up and lowsided me onto the pavement. No injury to me, but the bike flipped and stuff broke. Despite the bike looking bad, both the ZX6R and I were back on track within two hours time.

A few racing crashes between those two mishaps round out my thankfully brief crashing resume. That’s really not too bad considering I have ridden a lot of street and track miles over almost 40 years with many of those miles dragging knee on the racetrack.

Like I said, the crash that involved the new Ducati Multistrada, and resultant fractured clavicle, wasn’t a particularly big one.

I simply countersteered the bike a bit too hard while entering a turn on the gravel test track and lost grip at the front tire. I fared worse than the bike with the Multi suffering some cosmetic rash and a broken hand guard.

Before anyone blames the technology, this crash was not the bike’s fault! The Bosch electronics are designed to prevent braking and accelerating miscues, not manage the effects of pushing a front tire too hard into a turn. And since I was not on the brakes when I tucked the front tire, the bike is not to blame. These systems only manage available traction (when braking and accelerating); they do not create more traction! Read More about the Truths About Electronic Stability Control.

You may be asking why I would do such a silly thing. Surely I know enough not to push a 500+ pound street bike with quasi-dual sport tires on gravel, right? Yes, normally I would have never pushed the bike this hard, but what caused me to do this admittedly dumb thing stems from four factors:

As I got to my feet and shut off the engine I was in utter disbelief. Had I really just dropped a brand new Ducati? With shock wearing off, my inner voice began tormenting me with doubts about my professionalism, competence and judgment. Not surprisingly, the Ducati and Bosch folks were gracious about the whole thing (apparently this happens more than people think).

I ride motorcycles, and I ride them hard. So, I should expect an occasional mishap. However, part of me actually thought I had somehow trained myself out of being human, insulating myself from simple mistakes. While I have worked hard to be the best rider I can be, I am not (yet) perfect.

My collarbone is healed after 8 weeks and I’m back on the racetrack and street. As expected, part of me is a bit spooked about gravel surfaces, but not enough to matter. I’m back to riding hard and feeling good again. A big reason why I bounced back quickly is because I know why the crash happened and how to avoid it in the future. It’s a lot tougher when you don’t know what happened and don’t know how to avoid a future crash…that can get into your head and under your skin.

To avoid a similar crash in the future I’ll be more mindful about my limits at any given moment.

7 Replies to “Crashing Sucks: Ask Me How I Know”