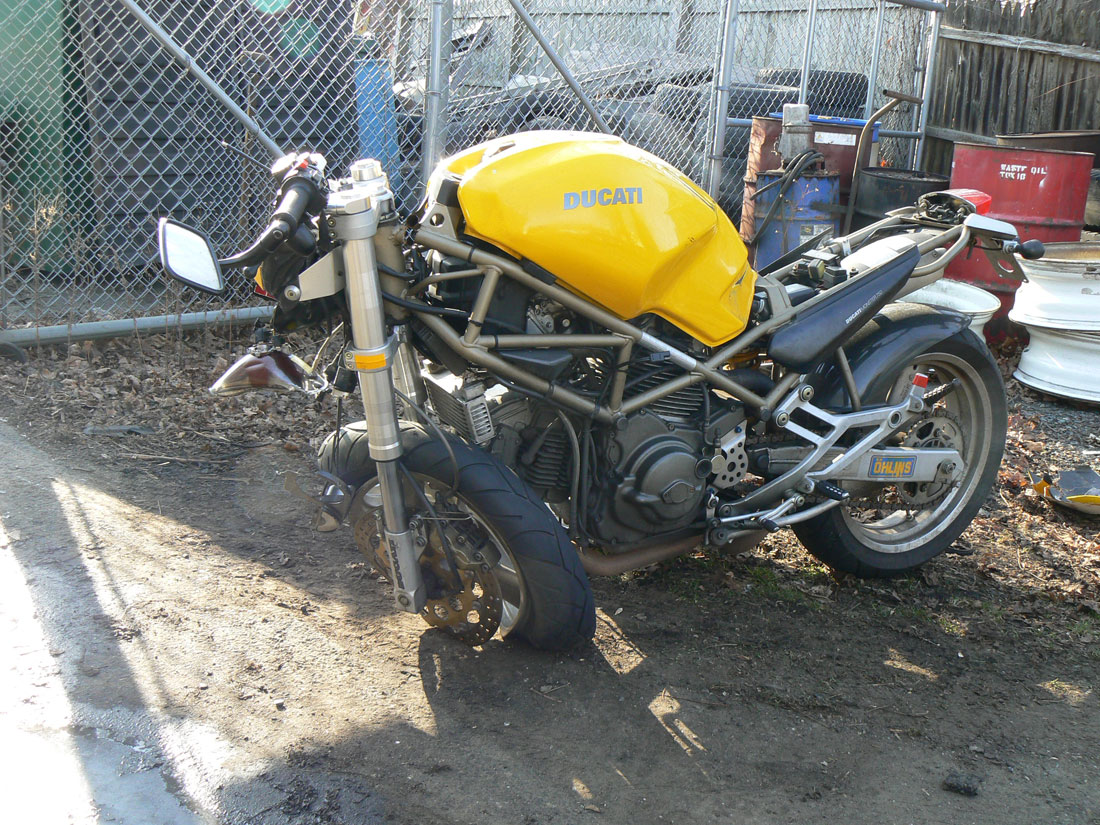 I’ve had only one “real” street crash and one minor one. The minor one involved a car who rolled into the back of my Triumph Bonneville. I didn’t fall, so it was very minor.  I also had a minor parking lot tipover (note to self: remove the disc lock before attempting to ride away). But tipovers aren’t exactly what I call “crashes”.

The “real” crash happened in 1978 when a car driver turned left in front of me…classic.

Thankfully, most of my crashes were racing incidents. I say “thankfully” because even though racing crashes suck, they don’t suck nearly as much as street crashes where the chances of injury after sliding into a tree, guardrail or oncoming car is quite high.

I’m truly grateful that the extent of my injuries from both track and street crashes were cracked ribs and a broken foot from the tipover.  These injuries were painful, but all healed without any complications.

Unfortunately, the “real” street crash resulted in a totaled 1973 Yamaha TX650 and the rear-end incident resulted in the Triumph’s taillight being smashed, but that’s what happens when you make impact with cars.

In all of the track crashes, bike damage was limited to easily replaceable parts, allowing me to get back on the track later that day. Sure, the cosmetic damage was a bummer, but I got over it–most people do.

There was a time when crashing on the racetrack was just as likely to get you killed as crashing on the street. This was because racetrack safety was abysmal with concrete walls lining the course and pavement not any better than a potholed rural road.

Thankfully, track safety is much improved. Even though a lot of people complain about the safety issues at my local track (Loudon, NH), the current track is much better than the old Bryar track that had all sorts of safety problems. We didn’t complain much, since all of the tracks were that way.

Another reason there are fewer deaths and injuries today is because of better protective gear. Pudding bowl helmets lined in cork were the racers’ choice at one time. Now, we have helmets that are pretty darn effective at preventing the majority of head injuries. Add to that the improvements in material and armor incorporated into jackets, pants, boots and gloves and it is possible to crash without suffering too badly.

Of course, where you crash is the biggest factor in whether you will end up in a hospital or hearse. Collide with a car and even the best riding gear is not likely to save you from some kind of injury. Crash on a modern racetrack, and you’ll likely get up, brush yourself off and walk back to the pits under your own power.

Unfortunately, road safety has not improved for motorcycle riders. More tar snakes and guardrails seem to appear every year and drivers are more and more careless about paying attention. And road conditions are often allowed to get pretty bad before they are fixed.

It’s been proven that people take greater risks when they feel protected. This is why drivers of large SUVs tend to feel less threatened than drivers of small cars. Most motorcycle riders understand that they are vulnerable to injury and ride accordingly.

This is why Risk Ignorance and complacency is so dangerous. The risks don’t change, but the inaccurate perception of the danger can make a rider think he or she can ride more aggressively or with less attentiveness.

Believe it or not, there were fewer racing crashes back in the day when races were held on road courses lined with stone walls, hedgerows, fences and houses lining the circuit. Racers knew that a fall would very likely result in death. So, most rode in a way that balanced risk and reward.

Today, there are many more crashes, but many fewer deaths and serious injuries because, with the exception of the Isle of Man and a few other “real” roadrace circuits, racing is conducted on closed courses with safety features such as runoff, gravel traps and airfence. Also, today’s protective gear is so much better. This means that racers can push harder, knowing that a crash will probably not be the end of the world.

Now, don’t get me wrong, racetrack crashes can be lethal. It’s just that the risk to reward ratio has shifted so that it’s not unreasonable to expect to get up unscathed after a racetrack crash.

The Perception of Crashing

Another advantage racers have when it comes to crashing is that racers expect to crash. After all, they are pushing the limits of grip and skill and are sharing the track with a bunch of crazies all set on going as fast as they can, determined to take your spot on the podium.

So, when you do crash in a race situation, it’s not unexpected. And if you do go down, it’s unlikely that you are seriously injured, so you get over it rather quickly. This makes the mishap psychologically easier to deal with.

It’s different when you don’t expect to crash. For instance, crashing during a track day will likely be more upsetting, because it is not assumed that crashes are inevitable. But, track day crashes still fall under the category of “not likely to get injured”, so most track day crashers get over the mishap fairly easily.

Crashing on the street is a whole other matter. Street crashes are often particularly traumatic, not only physically, but also mentally. Most street riders assume that they will not crash, even though the risks are actually much greater when riding on the street. It’s understandable, because most street riders go many miles and years without a crash, which makes it easy to think that it won’t happen to them. So when it does, their world is shattered, even if they don’t suffer a significant injury.

I’m able to write about my crashes today, because most happened on the racetrack in a controlled environment. I’m thankful that I have experienced very few street crashes.

Perhaps some of the reason why I’m still in one piece is luck, but I contend that the reason I have had few street crashes is because of my commitment to riding smart and never becoming complacent about risk. This includes learning all I can about riding and implementing effective strategies when riding in traffic or in the twisties.

Risk is always there and always will be. Learn to manage risk and perhaps you can join me as one who is mostly unscathed after many decades of riding a motorcycle…if we stay sharp and are blessed with a bit of luck.

What have you learned from your crashes?

7 Replies to “Is Crashing Really that Bad?”