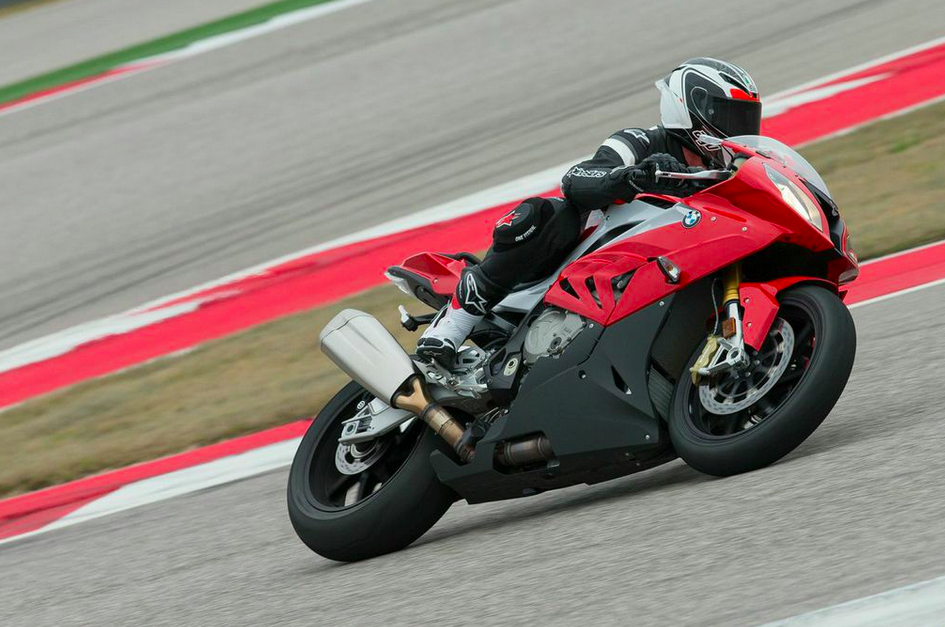 This is Part 2 of a series documenting my experience riding the new BMW S1000RR during the North American Press launch at the world-famous COTA racetrack in Austin, Texas. Check out Part One if you’re interested in learning about my first experience as a jetset moto-journalist.

Early last February, I got a text from Steve Lita, editor of Motorcycle Magazine-Rides and Culture asking me if I was available to attend the 2015 BMW S1000RR media launch. Why yes, I am. 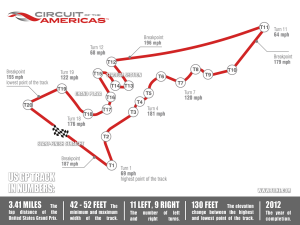 The Circuit of the Americas

The opportunity to ride the 2015 BMW S1000RR is certainly huge. But equally huge was the fact that I was going to ride the Circuit of the Americas (COTA) where the official North American Media launch was to take place.

When I flew into Austin, I got a birds-eye view of the 3.4 mile track with its 251-foot viewing tower and sweeping turns bordered by massive amounts of red, white and blue paint. What I wasn’t able to see from so far up was the 130 foot change in elevation. Photos and on-board videos do no justice to the hill approaching turn 1.

The track is fast with many triple-digit corners and a 3/4 mile back straight where I saw 175mph on the digital speedo. Many people say that the track is difficult to learn. I found it not too challenging (I found Barber to be trickier).

It took me two sessions to get the turn 2-7 series of Ss figured out, but I never found consistent reference points in the turn 8/9 blind chicane and the turn 17-18 segment confounded my lack of discipline to stay wide until just the right time. Another two sessions would have done wonders (we had 4 sessions, total).

In the end, I got along with the track just fine. My lap times weren’t great, but hardly embarrassing either. And I didn’t crash…not every journalist was able to say that.

Anytime someone shares their impressions of a bike’s performance you should find out a bit about who is doing the reporting. Without the context of the rider’s experience, you may end up with a false impression based on biases or lack of real-world knowledge. A reporter who has little experience on a supersport machine will come to conclusions that may not be useful or accurate. On the other hand, reading a review written by a professional road racer may not be meaningful if you never plan to take the bike to the track.

I am a street rider, track day instructor, occasional road racer and motorcycle safety professional who focuses primarily on advancing riders’ skills. This means that I’m able to evaluate a motorcycle from many different angles (pun not intended) and convey the bike’s capabilities, not only as a track bike but also as a potential street mount.

Since this was a racetrack launch and performance review, I needed to ride the S1000RR hard enough, but not risk tossing the $19k machine down the track. I had ridden S1000RRs before…the one I crashed (read Part 1) and another one that I didn’t crash. I’ve also ridden a handful of top-shelf liter-bikes on racetracks on the East coast, but nothing approaching 200hp.

I may have been seconds-slower than the faster guys, but the data on the instrument cluster indicated that I was using a decent amount of deceleration force and the fancy lean angle gauge said I achieved a respectable 54 degrees of lean to the right, but only 51 degrees to the left. 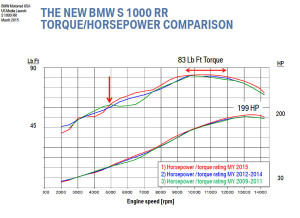 The S1000RR is both a wolf in wolf’s clothing and a sheep in wolf’s clothing. The headlights, turn signals, heated grips and cruise control say “streetbike”, while the space shuttle power, ultra-light throttle action and racey geometry say “race weapon”.

Thankfully, the 2015 RR is a sweetheart when it comes to power delivery. The fueling is impeccable and linear. Still, we are talking about a 199hp (claimed at the crank) bike that weights 457 pounds soaking wet.

Compared to the first two generations of S1000RRs, the 2015 model is a comprehensive redesign of engine, frame, electronics and performance. The Pirelli SuperCorsa SP street/track day tires took a couple laps to warm up in the very humid 60 degree Texas morning air, but then provided confident grip and stability. 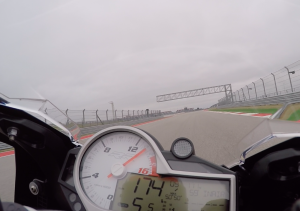 The first time accelerating down the long back straight took my breath away. 160, 165, 170. Holy shit. And the throttle wasn’t even quite fully open. Subsequent laps saw the speedo top 175 mph and there was more power that I was leaving on the table.

The Gear Shift Assist Pro helped me reach this lofty speed with clutchless upshifts delivering uninterrupted power from second gear to 6th. The clutchless downshifts are a RR exclusive for 2015 (others will offer this feature very soon, I predict), allowing me to bang down on the shifter (or up for GP shift) as it auto-blips the throttle for mostly seamless shifts.

The upshifts worked great once I stopped pre-loading the shifter (it confuses the electronics). But, the downshifts were less cooperative no matter what I tried with one of the bikes not downshifting without doing it the old-fashioned way. Also, the shift lever felt vague, causing me to wonder if the tranny actually made the downshift or not. The transmission is buttery smooth, BTW.
Here’s the on-board video:

OK, high speed runs are exhilarating but don’t hold my attention for long. The 2nd gear hairpin at the end of the straight…now THAT got my attention! At that moment, my focus was 100% on braking power and stability.

Thankfully, the Brembo calipers (and 320mm rotors) provide wonderfully powerful and precise lever action, allowing hard, fade-free braking as well as precise trailbraking control and feedback. The RR is so stable under hard braking that it felt almost like cheating. The electronic Race ABS surely plays a role in instilling confidence, but it’s the ABS in concert with the anti-lift (stoppie) control, slipper clutch, semi-active electronic suspension damping and the superbly balanced chassis that really raises the bar.

Not that I ever really noticed any of those things…not because I wasn’t pushing hard, but because these e-aids are so finely tuned. I did notice when the anti-lift control was shut off as the rear tire skimmed the tarmac during one particularly aggressive corner approach. Race ABS and anti-lift can be set for various levels of intrusion using either the rider modes or by selecting a’ la carte under User mode. More about the electronics can be found below.

Swinging a leg over the RR immediately reveals a lithe package. Once underway, the bike felt to me like a slightly heavy R6, and at 457 pounds (wet) it’s only 40 pounds off. That seems like a lot, but the power and chassis engineering mask that weight. The agility became apparent in the fast Ss, the blind chicane and the switchbacks. The chassis was dead stable when trailbraking and cornering at fast, knee down speeds.

The fully adjustable suspension on the base model is more than good enough for most people. But I’d spend the extra dough on the Dynamic Damping Control. It responds in milliseconds to changes in braking, cornering, accelerating and road surface. It’s like having an on-board suspension expert tweaking the clickers as needed for the best grip, drive and stability.

I didn’t get the chance to ride the bike on the street, so I can only speculate on how the RR will perform as a day to day companion. But, in my estimation I bet the combination of light weight and impeccable balance will make the RR a sweet day-to-day mount.

It wasn’t long ago that I would think someone was crazy who suggested that an almost 200hp bike would make a decent street bike, but the S1000’s fueling is so good and the power so controlled that it is indeed viable.  It has all the right features to make a fine street machine…gobs of easy-to-use torque, a ton of electronic stability aids and a reasonably comfortable ergonomic package. The cruise control and heated grips also help. 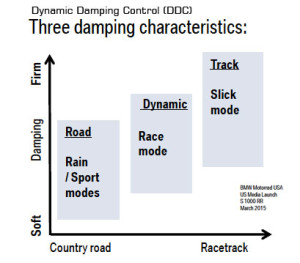 Electronics have become a huge part of modern motorcycle engineering and the RR has ample amounts of e-technology. The RR has Lift (stoppie) Control Stability control and Race ABS to help going from 175 to 35 an almost drama-free experience. More intervention happens in Rain and Race rider Mode (This should be called Street Mode, IMO) and very little interference in Slick Mode (the mode I rode in most of the day).

Stability Control (base model) and 14-step Traction Control (Standard and Premium Packages) also intervene appropriately to match the 3 (Base) or 5 (Optional) rider modes. The Premium packages include “User” mode which can be customized almost infinitely to combine rider modes, TC and ABS settings.

All this manifests into a very sophisticated machine that can mitigate (and mask) the consequences of some mistakes. This gives a lot of confidence, but make no mistake…you can still crash this bike, so don’t get too cocky.

With this number of electronic options comes a learning curve. It will take a dedicated and savvy owner with about a season of track time to discover all the potential of the RR. I also wonder how the electronics will fare over many miles of normal exposure to weather and time.

Buy one. You’ll spend $15,500 for the base model, which is a good value for an excellent machine. For $16,795 you get the Shift-assist Pro, cruise control, heated grips and upgraded TC. But, I suggest you fork over the $18,695 for the DDC and forged wheels. It may mean you eat spaghetti out of a can for a while, but you won’t regret it, especially if you ride on the track.

Please look for the article I wrote for Motorcycle Magazine-Rides and Culture where I go into greater detail about the electronics and features.