Living the Life of a Moto-Journalist 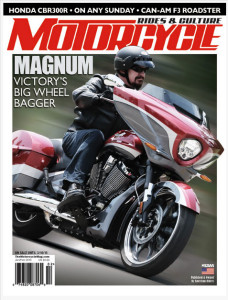 Early last February, I got a text from my newest best friend Steve Lita, editor of Motorcycle Magazine-Rides and Culture asking me if I was available in March to attend a new bike launch. Um, sure. Tell me more.

It turns out that Steve and all of his go-to editors were previously engaged and he needed someone who can both ride and write. I can do that. A few more texts later, I learned that the press launch was for the 2015 BMW S1000RR uber-sportbike and was being held at the Circuit of the Americas (COTA) world-class racetrack in Austin, Texas! Be still, my heart!

Since I write the monthly Street Savvy column for Motorcyclist Magazine, I wasn’t sure that Editor-in-Chief, Marc Cook would give his blessings. It took a tense 5 minutes for Marc to return my text giving me the okay! It looked like I was going to finally live my dream of being a motorcycle journalist who gets to ride other peoples’ bikes in cool parts of the world…and get paid to do it!

I’ve been writing safety/skills articles for 15 years for Motorcycle Consumer News as a freelancer, but this job never included riding new bikes in cool places. Like many of you, I always wondered what it was like to live the life of a jet-set moto-journalist. I was about to find out.

Even though I have total confidence in my ability to ride, there was a part of me that couldn’t help thinking how much it would suck to either be the slowest guy on the track and/or crash a $20,000 motorcycle in front of the most well-known journalists in the industry.

As a track day instructor, I am often asked to give the newest model a few laps to see what I think, so I have a lot of experience riding other peoples’ bikes. I adapt quickly to new machines and have never had an issue with control. Except one time. I was riding Twisted Throttle’s brand new 2010 S1000 when I tucked the front tire on a cold and slightly damp turn 11 at Loudon. It took me months to shake off that embarrassment and I wasn’t about to let it happen again. 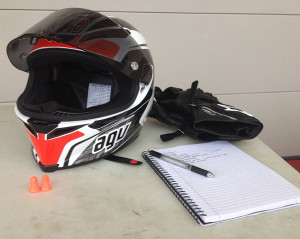 In the coming weeks, I read up on the S1000 and watched on-bike videos of COTA and waited for brand new leathers, boots and gloves from Alpinestars and an AGV Corsa helmet to arrive. Understandably, gear manufacturers are eager to have their riding gear on the cover and in the inside pages of national magazines whenever possible. Dainese sent me boots and gloves for the event, but didn’t have leathers available, so we went with the full A-Stars setup. Product reviews of the riding gear will appear with the S1000RR review.

Apparently, not all press junkets are created equal with some little more than a basic track day or a street ride that includes lunch. The BMW S1000RR junket was going to eclipse these austere events in a big way. Arrangements were made for flight, hotel, meals, and airport drop off and pick up. No, I did not get first-class seats, but I did stay in the posh 4-Seasons hotel in Austin and ate very well. 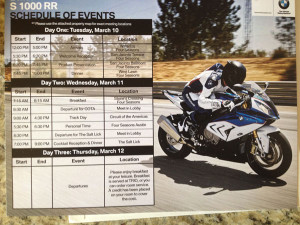 Arriving in Austin, I was greeted by Matthew, my limo driver who handled my luggage. Thankfully, my Ogio gear bag appeared on the conveyor in no time and Matthew drove me to the hotel while I sat dutifully in the back seat where all self-important people sit. A porter carried my bags through the lobby and up to my room. He refused my tip, saying that BMW was taking care of everything. OK, I’m starting to get it.

Often, the marketing people from the bike manufacturer give out nice SWAG bags…not this time, but I did enjoy the gift basket. Yum…beef jerky. Seriously, not having sweet SWAG was fine with me. I was more than happy just to be treated to the venue and first-class treatment. Thanks, BMW!

I wandered around the hotel and then got ready for the welcome cocktail party. I nervously descended the stairs to find about 30 people sitting and standing around an outdoor patio open bar, chatting about this and that. Since many of these men and women are regulars on the bike launch circuit, they know each other well enough to ask about their spouses and kids and get caught up on recently discussed professional matters. At first I feared being the proverbial wallflower, not having much previous contact with these folks. But, a quick glance told me I would fit in just fine, being acquainted with maybe 6 or so others in attendance. 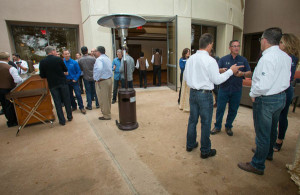 An hour or so later, we were escorted to another room where we sat for a presentation highlighting the notable new features for the 2015 RR. Some introductions were made, including the attendance of special guests; Keith and Dylan Code (California Superbike School), Roland Sands (ex-250GP star and custom bike builder), Jesse James (West Coast Choppers), and singer Lyle Lovett who would join us the next day.  Nate Kern, BMW’s S1000RR ambassador-extraordinaire, gave some insight into the significance of certain features that he wanted to make sure we paid attention to.

Dinner was then served in a private dining room. Ari Henning (Motorcyclist) and I had the absolutely delicious Salmon. Unfortunately, Ari had a rough night as his system struggled with the fish. 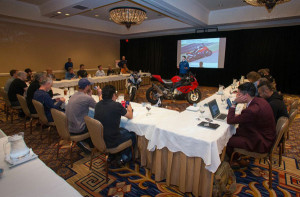 After the presentation, the bar was re-opened, but I know better than to consume much alcohol before riding on the track so I went off to bed. I, thankfully, slept remarkably well.

We were instructed to be in the breakfast room early to grab some chow before getting on the bus to the racetrack. The bus driver was stuck in traffic, so we got a late start. After a 30 minute drive we were deposited in the paddock where our gear was moved to a changing area in the garages. The journalists were escorted to a classroom for the marketing/press briefings on the new line of BMW riding gear and another presentation on factory accessories available for the S1000. A fully-kitted RR was on display with over $11,000 worth of goodies. 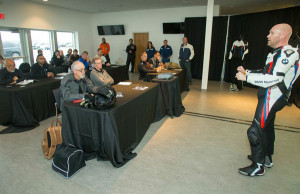 We were divided into two groups. Looking around, I could see that I was put in the “slow” group. That was fine with me…and understandable. As a first-time freelancer I’m an unknown quantity to BMW and it meant that I would be one of the faster riders on the track. Besides, it ended up that the guys in the other group were ripping faster than I was willing to go. 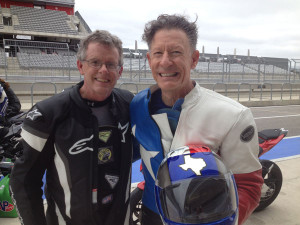 After the presentations, we got suited up. This is when things got a bit bizarre. Here I am wrestling to put on a set of brand-spanking new Alpinestars leathers when I glance over to see Lyle Lovett wriggling into his custom “Lone star of Texas” Vanson leathers. “Hey, I know you.” Lyle is world famous and one of my favorite all-time musicians, but today we were just two guys getting ready to ride.

Go-Pro was there loaning out cameras and attaching mounts to the bikes. There was also a drone hovering around with a camera as the first group set out for a session of follow-the-leader behind Nate Kern. All but two journalists had ridden COTA before, so we were mostly in the same boat.

This is getting mighty long (for the Internet), so I am splitting this into two parts. Read Part 2 where I will reveal my thoughts on COTA and riding the 199hp 2015 S1000RR.

In the end, this was a fairy tale experience. But like most things, there are ups and downs. Listening to the seasoned journos talk about their struggles with travel and time spent away from home, I realized that apparently it’s not all fun and games.

Watch this video interview of my new acquaintance, Jeff Buchanan, talking about what it’s like to ride for a living.

After all was said and done, I had a great time meeting new industry peeps, getting reacquainted with not so new acquaintances and living the life of a real moto-journalist for a couple of days. I hope people enjoy the article (look for it in a mid-summer issue of Motorcycle Magazine-Rides and Culture). I also hope more offers to test bikes happen in the near future. It sure was fun. I’ll be awaiting your next text, Steve.

4 comments on “Living the Life of a Moto-Journalist”