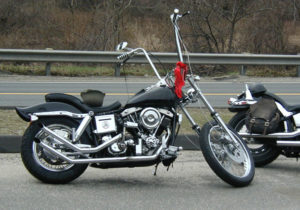 Like politics and religion, it’s usually a very bad idea to bring up the Loud Pipes debate in mixed company. But, this website is here to discuss such topics, because your well being is at stake.

Before you assume this is an anti- or pro-loud pipes opinion piece, rest assured that I am sympathetic to both sides of the argument. I’ve had bikes with loud exhaust and stock exhaust.

My intent for writing this article is to shed light on the effectiveness of certain strategies for surviving the streets on a motorcycle, including loud pipes.

First, let’s discuss whether noise is effective at getting drivers’ attention. Before that can be answered fully, we must first define “attention”. A loud noise intended as an alert, such as a siren (EMS or law enforcement), a fire alarm, or a horn is perceived as something that requires attention and triggers immediate response.

The appropriate response depends on the noise. A siren heard while driving means you need to pull over. A blaring horn means you may be about to collide with another car (or the other driver is just being a dick). Either way, you snap out of any stupor you may be in and frantically look for the problem.

A siren blasting from a municipal building means a risk to the public, like an approaching weather or seismic event. Even this depends on where you live. In Kansas it’s likely to be a tornado. In California, think earthquake. It also depends on where you are. In a movie theater this may mean fire. You get it.

Did you know that drivers colliding with stationary construction crews is a big problem? Hard to believe, but I guess it’s a thing.

Several methods have been tried to mitigate this all-too-common problem with the latest being sound. An article from the Iowa DOT talks about their trial using audible attenuators to alert drivers of construction crews in the roadway. Read the article here.

Below is an accompanying video demonstrating the attenuator. Take a look. I’ll wait.

Many of you will take this attenuator solution as justification to run loud pipes.

But, hold on. There are differences between this system and loud motorcycle exhausts. 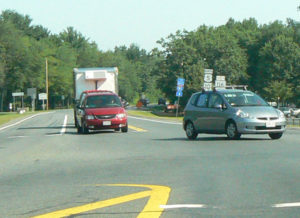 Considering that exhaust noise is directed rearward, is a loud exhaust more effective in this situation than being seen?

One big difference between the attenuator and loud bike exhaust noise is that the attenuator is directed toward the driver and is accompanied by bright flashing lights. The sound from a motorcycle exhaust is mostly directed rearward.

Sirens and horns are pointed forward for a reason. And when you consider that most multi-vehicle motorcycle crashes come from in front, not behind, you can see the argument against loud pipes being responsible for saving lives.

Also, sound bounces off buildings, etc and is absorbed by vegetation, etc. This means that locating the source of the sound is tough. And the time it takes for a driver to identify your location could be way too late.

Can You Hear Me Now? 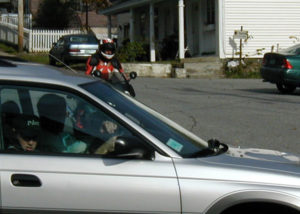 Modern cars are well-insulated from sound.

Another argument against loud pipes is that even the loudest exhaust may not be heard and then responded to in time. This is because cars are sound-insulated to the degree that moderately loud music or an AC fan on high can mask, mute or muffle the sound until it is just part of the background noise.

An open window certainly helps in this regard, but almost every vehicle on the road today has efficient air conditioning, which means fewer and fewer people drive with windows open. 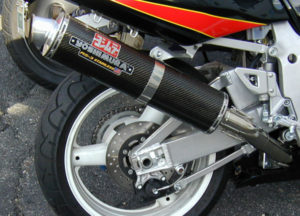 Loud pipes are seen (and heard) on sport bikes, as well as cruisers.

OK. Let’s assume that your loud pipes alert a driver that you and your bike is in the vicinity. But, to avoid a collision requires the driver to know exactly where you are. Knowing you’re in the vicinity isn’t enough.

An example is a driver traveling in the same direction (you’re not riding in a drivers blind spot, right?) not being able to see you and then cutting you off. Unfortunately, your loud exhaust noise won’t tell him or her whether they can change lanes or not. They may look first, but maybe not.

One scenario that was pointed out to me that may justify loud(er) pipes is when in very slow traffic (think L.A.) and you are lane splitting. At these slow speeds it’s possible that a driver could hear a bike approaching from behind and will think twice about changing lanes. But, thankfully most riders don’t have to endure (or at least avoid) that extreme traffic situation, which brings us back to questioning th validity of the loud pipes strategy.

Let’s assume that loud exhaust systems can get attention. But what exactly is the noise conveying? It’s not telling drivers’ to pull over or run for cover, so what do we expect drivers to do exactly?

A Reliable Solution: Be More Visible

If your real goal for having loud pipes is to get drivers’ attention so they don’t cut you off or crash into you, then the arguments made in this article suggest you’d be wise to consider other (or additional) strategies. Here are some suggestions that are likely to be effective. 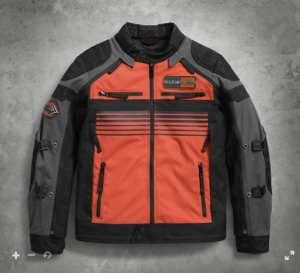 Now, I know that hi-viz jackets, vests and helmets may not be your thing. But, you don’t have to go all HAZMAT to become more visible. Harley-Davidson predictably sells mostly black jackets to satisfy their traditional customer base, however look beyond the badass blackness and you can find a few more visible options.

Those of you not as encumbered by traditional style requirements have many options available to you, including the aforementioned hi-viz, but also white or bright colored gear that looks both sporty and stylish…and helps you be seen better in traffic. Check out this Scorpion jacket at Twisted Throttle. 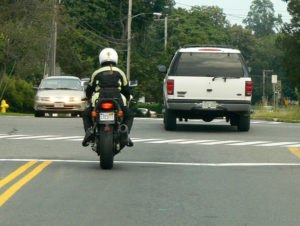 Lane position strategies are effective for helping drivers see you.

One of the MOST effective tools for being seen and avoiding crashes is effective lane positioning.

Even if you are in plain sight, don’t assume drivers see you. There’s this thing called “motion-induced blindness” where stationary objects disappear when surrounded by a moving background, such as busy traffic. Get drivers’ attention my moving within your lane. You can simply change lane positions, or do a slight weave as you approach. 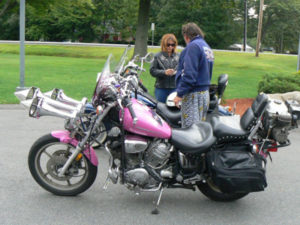 Perhaps a train horn will do the job. Notice the motor mounted behind the backrest that powers the horn.

You can rightly argue that a horn is in the same category as loud pipes. But, there is a difference. Unlike loud exhaust, a piercing horn has a more commanding meaning than the noise from loud pipes (yes, even from a “barking” throttle blip). Remember earlier when I talked about how the types of sounds communicate different meaning? Yeah, That.

The horn on most motorcycles is anemic at best and unless you fit an aftermarket blaster on your bike, you can only rely on this being effective at low speeds. Check out aftermarket horns at Twisted Throttle.

Before you get all cranky thinking I’m not on your side. I believe that any added tool for being seen is worthwhile.

However, (you knew this was coming, right?) loud pipes can’t be relied on for adding the kind of conspicuity necessary to avoid collisions…visibility. People have to see you!

I’m no scientist, and this is not based on empirical evidence, but experience and logic suggest that relying primarily on loud pipes for visibility is a weak strategy. Does it help? To a degree. But, in my opinion, the effectiveness is trumped by the risk of discrimination from authorities, the disdain from your neighbors and the perpetuation of the outlaw image puts us in risk of heavy handed regulation.

Of course I know that this won’t convince anyone already enamored with the badass sound of their bike to dig up the stock exhaust from the basement. However, I hope this article gives you pause before you repeat the old saw “Loud Pipes Save Lives” without at least considering that this strategy may have a relatively minor effect on preventing crashes.

Admit it…loud pipes make your bike sound better and is a way to experience the raw, visceral power of your awesome machine. But, ask yourself if perhaps they aren’t as effective as most people think at saving lives.

4 comments on “Are Loud Pipes an Effective Survival Strategy?”