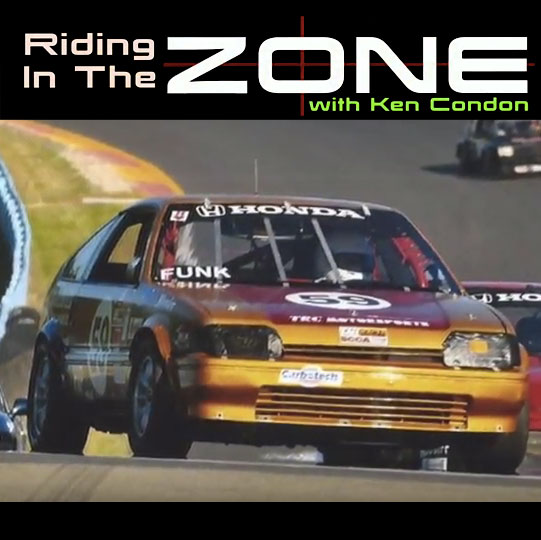 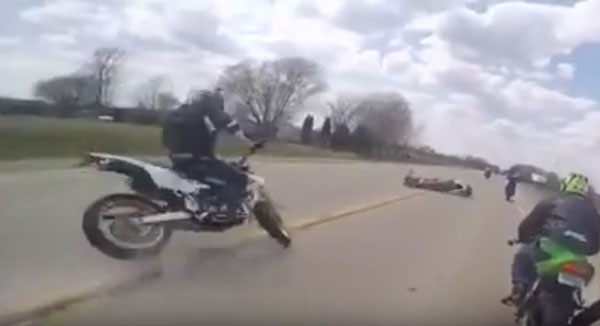 Take a look at this video of the guy who crashes trying to avoid his buddy who just hit a dog. The second rider doesn’t hit his friend, but almost gets creamed by an oncoming Tractor Trailer. A lot of comments and Monday morning quarterbacking have filled social media already, so I wasn’t planning to add to the noise until a reader requested that I share my thoughts. So, here you go.

First off, I am really sorry this incident happened and I’m glad everyone is okay. I’m very thankful that the truck driver was paying attention so he was able to miss hitting the sliding rider. It’s really too bad about the dog, though.

For those of you who have not seen the video(s):

A Second Incident Behind

Make note about the second video that another incident happened in the back of the group. This is an example of a chain reaction that can lead to more issues. Let’s analyze this to try and learn from the incident. Note that my comments are based on typical causation and not firsthand involvement.

Animals are unpredictable, making it super difficult to know when they might dart in front of you. I hit a small dog last season when it ran out from some high brush and directly under my front wheel. We can’t control this, except to scan for movement along the sides of the road.

The staggered group riding formation that the group was using is not unreasonable when traveling on a straight section of road. But, if you look at the video from the rider ahead who looked back, you can see that the rider that struck the dog could not see the animal until it was really too late. That’s because the video rider was blocking the view of the side of the road.

Staggered formations also prevent the riders from using the full width of their lane and limited their option to swerve.

It’s hard to tell just how close each rider is following, but a too close following distance commonly results in panic-induced over reaction. I suspect this was another factor.

A Lack of Training

The second rider got on the brakes hard, which is good. But, his abrupt braking caused his rear tire to leave the ground, which was quickly followed by smoke coming off the front tire from a skid. Once a front tire skids, it’s all over, most of the time.

Speed is usually a factor in incidents, simply because the slower you go, the more time and space you have to respond to hazards. That said, it appears that the speed was reasonable for the road.

Another Example of the “I Had to Lay It Down” BS

The second rider said he avoided hitting his friend by deliberately dropping his bike. I hear this all the time…”I had to lay it down to avoid [fill in the blank]”.

I know, the idea is to try to avoid what could be a worse crash. And in VERY rare situations, this may be true. But, 99.9% of the time, crashing to avoid a crash makes no sense. Today’s brakes and tires allow tons of grip and stopping power to scrub off big speed very rapidly…if executed correctly.

Even if this was a viable solution, having the presence of mind to deliberately crash while facing a panic situation is not bloody likely. It’s way more likely that a person will react the way untrained humans do…by grabbing the brakes abruptly enough to cause the front tire to skid. Classic mistake.

The truth is that the second rider who crashed screwed up by braking too abruptly. Don’t feel too bad. We humans make mistakes.

As much as you’d like to think of yourself as a hero for sacrificing your bike and riding gear to avoid hitting your buddy, the odds are that you just braked so hard as to loft the rear tire and skid the front tire, which dropped your moto to the ground in an instant.

You’re not alone. A lot of riders claim that they layed down their bike because they:

The Case For Training

It’s likely that this guy has not been exposed to such a severe situation before and was not trained to handle it. Unfortunately, most riders are ill prepared to handle this.

To be fair, it’s possible that I might do the exact same thing, because I too am human and make mistakes. But the odds are that I won’t, because I’m trained. One thing for sure is that I would not have deliberately crashed my bike because I thought it was best to throw in the towel.

Practicing braking techniques not only teaches your body how to execute the maneuver, it also puts the maneuver into your muscle memory. This is key when you have a split second to respond. Untrained riders snap, whereas trained riders are more likely to remain in control. ABS would have helped the second rider stay upright, but deferring rider ability to technology has its problems, too.

An Interview with a So-called “Expert”

Just look at the TV reporters and so called expert who gave the rider a big attaboy. The television station interviewed a local motorcycle safety instructor about the mishap:

“A perfect choice by the rider,” says Vandervest Harley-Davidson Riding Academy Coach Susie Davis. “The bikes can be fixed much easier than people can be fixed – so proud of them for doing that.”

Both men decided to drop their bikes and skid on the road instead of swerving to avoid the dog and then each other. Davis says that split-second decision may have saved their lives and the lives of the other motorcyclists with them.

”I think they did a miraculous job,” said Davis. “They let the bike go. They saved themselves. They came out alive. They’ve come out with minor injuries. I don’t know that it could have been done any differently.”

WRONG! This coach is dead wrong and is perpetuating this BS. Having a supposedly trained instructor miss the point just goes to show how deeply ingrained this myth has become. Sad.

Riding Man author Mark Gardiner wrote these two excellent articles that corroborate my point of view. Check them out.

Untrained humans will react in a knee-jerk manner to panic situations. To avoid this:

The guys did at least one thing right: They were wearing protective gear. Good job, there.